A few days ago, a rewrite of libreqos.io (moving it over to rust, from python) showed up here: 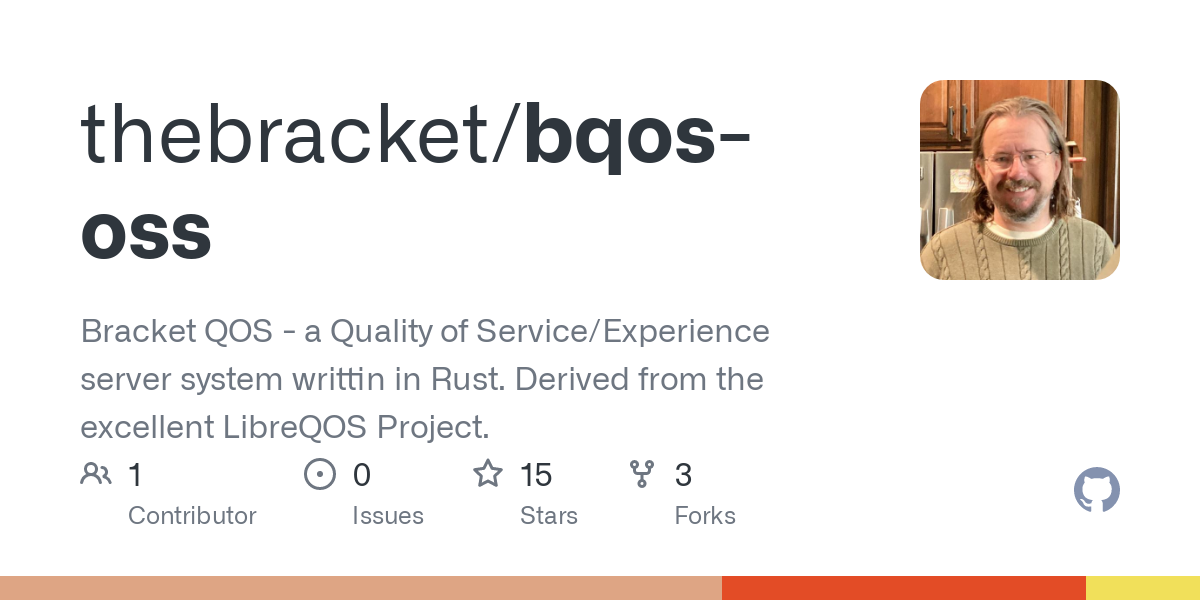 It (on good hardware) is capable of very complex shaping, and by leveraging xdp and ebpf, is capable of pushing over 10Gbits through thousands of cake instances...

What kind of cpu overheads does qosify have for gbit+ traffic?

Hi, I've made a new package for OpenWrt called qosify, which implements many features also found in this script. Instead of using iptables and ipset, it implements classification as a single configurable eBPF module. It supports port based rules and DNS hostname wildcard/regex matching for classification. You can find some details about it in this readme: https://git.openwrt.ifw.cn/?p=project/qosify.git;a=blob;f=README The package is in OpenWrt master.

BracketQOS uses pping to continually monitor TCP latency on your network. It doesn't work like ping - it monitors actual customer TCP traffic, timing the latency of each individual connection.

This file has been truncated. show original

@Lochnair can you see how pping is leveraged in the source? I had a look but haven't found it yet.

Most of the core devs are gathered over here:

@interduo @richb-hanover @Belyivulk @tohojo @rchac @mjstekel @syadnom @mwangi-ki…boi @axonxorz @thebracket @marsalans @micron10 (and whoever else I missed) - I have been watching this project expand in various directions rapidly and I hope, meeting many of your pent-up needs in production. I have some spare time in the coming quarter, and trying to get a grip on what is important, what is needed, what resources are missing, getting some bugs closed, and having an overall architectural discussion, and a sane roadmap is on my mind. A) I am in PST, and available 7-7 for a videoconference any time next week wed-friday. Needn't be with all of you at the same time... B) is anyone here going to wispaloosa? I've mostly been observing a big wireless-n network and looking over the cake statistics deeply, of late. I have a few thoughts towards improving cake, I've seen some thoughts towards improving the htb stuff, ipv6 support is still a pita, and I don't know what else.

Based on the results on x86 - pping and ebpf pping are too invasive to use at 10Gbit. However looking at that data, it seemed to me that hooking the ack-filter code was the most cpu-efficient way of applying a pping like technique to cake.

@Lochnair can you see how pping is leveraged in the source? I had a look but haven't found it yet.

Unless I missed something, it looks like it only uses pping to gather latency statistics presented in the GUI. I haven't been able to find anywhere it's used in the daemon to control the shaper.

I gotta say that rust to me looks completely alien, almost as bad as perl line noise.

Heh, porting the Lua autorate stuff to Rust is my first proper experience with it, so it's been quite a learning curve.

But it's been fun, and I appreciate the safety features a lot

It doesn't help that I'm always with a big problem an existing rust library doesn't solve. The libreqos.io code shells out like 10 times per customer, and your typical fork/exec takes, oh, 50us or so, when all it needs to do is tc qdisc replace dev eth0 root cake option, option, option. So I figured my first rust proggie was going to be leveraging pure netlink to do that, but, noooo... no lib for it.

Yes, one of my goals in the Rust port is to avoid calling any external programs if I can.

Currently I'm using neli for the Netlink parts, it's not all that high level, so I ended up using strace on tc to see what it sent to get it working. I also get interface statistics over Netlink. The Netlink parts lives over here: https://github.com/Lochnair/sqm-autorate-rust/blob/master/src/netlink.rs

And yes, I do both ICMP type 8 and 13. I use nix (safe wrapper for libc) to open raw sockets and etherparse to handle parsing and crafting ICMP packets.

So many crates, no way to choose. There were multiple crates for raw sockets I just saw like this one: https://docs.rs/smoltcp/0.6.0/smoltcp/socket/struct.RawSocket.html ? It seems ideal to try and avoid libc, I think, and tokio support a must, but...

but after outlining what I wanted it to do, I realized I would be damned if ever wrote another C program in userspace again, and equally damned, it turned out, if I wanted to somehow get at underlying low level facilities like TCP_INFO, or icmp, in rust or go.

I don't think there's anything newer than Cortex A72's that are supported in master right now? So probably a throw up between the Rpi4 (quad A72) and the newer Rockchips (Dual A72 + Quad A53 I think).

I'd probably discourage use of the RPi4 unless you already had one handy due to the supply issues and the complexities around getting decent ethernet phys connected. (Lack of free pci-e on the 4B means USB3 ethernet, or the need to check out the multitude of carrier boards if using the compute modules)

I imagine the Bpi-W3 is likely to be the next step up whenever that ends up shipping. Everything else is just... an actual devkit or a server?

Unless you count running the armvirt target within qemu on something like an Ampere or Apple Silicon cpu. I'd look into whether a Mac Mini would suffice for multi-gbit testing or whether you'd run into some weird technical limitation first.

RB5009UG+S+IN has a Cortex A72 quadcore CPU AFAIK, has SFP+ and 2,5 GbE, but isn't officially supported. There's a good port though and I'm running it as my router, just tested master with 5.15 on it the other day.

https://mikrotik.com/product/rb5009ug_s_in might be ideal!!! Do the ethernet ports have BQL? ( various files cat /sys/class/net/the_ethernet_device/queues/tx-0/byte_queue_limits/limit )

Actually, even Rust std uses libc for sockets it seems, so I've given up on getting rid of that dependency.
But for ICMP type 8 smoltcp could be nice, since it handles the whole chain, but it doesn't expose type 13, so I'll stick with what I've got for now.

I hope that something like https://crates.io/crates/syscalls will mature and be supported on all architectures in stable, then we could drop libc for the syscall related stuff.

For TCP_INFO, Nix has facilities for getting socket options, but currently doesn't implement TCP_INFO.
The major thing that makes it a bit painful to add (at least for me being a Rust newb) is that the tcp_info struct uses bitfields, which Rust doesn't have builtin support for. So that'd take some research on how to handle.

I gotta say that rust to me looks completely alien

I feel the same way. I have always really liked the look and feel of C and am dubious about the way rust looks.

I checked this list, and the Marvell Amethyst 88E6393X switch inside doesn't seem to be supported, from what I can gather?

I'll check when I get home though.

Are you aiming to run something like libreqos.io or Bracket QOS on OpenWrt? I'm not sure I see the use case. Are you looking for something power efficient to cover a single WISP tower?

For optimizing CAKE in a home setting I'd look more in the direction of something like software flow offloading, not sure how the current state of that is.

@Borromini Switch doesn't matter for this, MVPP2 is the ethernet controller.
I know it has some fancy stuff, but no idea if it has BQL

All: I have been contemplating doing "cerowrt II", or at least, another iteration of the "make-wifi-fast" project from bufferbloat.net. It would have roughly the same scope as cerowrt had had in trying to push the future of open source networking technology forward. That said, I'm not sure what the world needs anymore!! as nearly all my main goals for the Internet at large were met by the ipv6 work, fq_codel and cake, and portions of the homenet project that made it. Those ended up wildly influe…

Beyond fq_codel & cake For Developers

fq_codel and cake have been available for some time. Cake has received a lot of improvements since it has become available. Both appear to not be particularly adequate for consumer embedded routers with MIPS and ARM microprocessors and symmetric gigabit links. Wireless routers have to do even more work when they handle NAT and they are also used as access points. These devices can't handle 1 gbps of traffic when using cake. Software offloading can't work when using ingress shaping. Hardware off…

I have been sucked into helping stablizing the current and next releases of openwrt wifi, and it's beginning to look like many of the power, multicast, and reliability problems have all been solved, thx to the enthusiastic testing and commitment by openwrt's wonderful community, and I really hope rc6 rocks and hundreds of wifi bugs all over can be closed that were side-effects of the mess. But! What I'd actually set out to do months ago was test implementing more than a few latency reducing i…

In my case I'm very frustrated that vendors like mikrotik have only just added cake, and are 6-7 years behind openwrt in many respects. They make good hardware, but....

One of the biggest problems linux has had in the last few years is that it bottlenecks on reads, not writes. Some bleeding edge stuff like vpp and dpdk appeared that could use 1/16th the cores to blast more packets... but lack any method at all at doing good queue control. XDP and ebpf are responses to that while still retaining good egress characteristics.

"Something power efficient for a tower" & well queued & encrypted backhaul would be great! I am allergic to python, but rust seems fast and performant and easier to make run on openwrt/routerOS/vyatta/linux/etc

PS if you (or anyone) can figure out a way to poll tcp_info in rust in crusader, it would be GREAT. For those here that haven't played with it yet, it's here: https://github.com/Zoxc/crusader

@dtaht Does this help any?