Xiaomi at it again with their... 10th? 802.11ax router design. Not to be confused with the similarly named AX6, which is a Qualcomm based solution, this is a MediaTek MT7622B design.

EDIT: The below is crossed out for a reason, you will probably have more success using UART to glitch out the recovery sequence and having it fail-open the UART input if you have a telnet locked AX3200/RB01. See: Adding OpenWrt support for Xiaomi "Redmi Router AX6S"/"Xiaomi Router AX3200" - #513 by arch_pilot

If using a AX6S or RB03, just "acquire" the closed beta firmware image and flash that for access.
Will require either exploit on stock firmware or manipulating u-boot env with nand programmer. Dumping and modifying the spi-nand may be easier to pull off due to the unpopulated pads next to the installed spi-nand. (Chip appears to be supported by SNANDer, for those with CH341A https://github.com/McMCCRU/SNANDer)

Sadly, the old extendwifi vulnerability present in earlier versions of the AX9000 is patched in the earliest firmware available. (I can see that they now sanitise the token input)

It however seems there is/was a image parsing bug in the mkxqimage binary of the other models though, so we'll see how that pans out.

Refer to the wiki for installation instructions: https://openwrt.ifw.cn/toh/xiaomi/ax3200

Presumably this device will be of little interest to those who managed to acquire cheap E8450/RT3200, but this should be available globally (well, if you count grey-imports from Ali as global) for a non-ridiculous price.

Around 70 EUR incl. 19% would be pretty reasonable, especially considering the scarce availability of the rt3200. The big question would be about how locked down (secure boot, etc.) this device is and how many other hurdles come up, RAM could be a tad bigget though.2

The big question would be about how locked down (secure boot, etc.) this device is and how many other hurdles come up

I suspect whomever does bring-up may also end up replacing u-boot or chainloading another u-boot because of similar ubifs compatibility issues like the other MT7622 devices.

If I'm looking at this correctly, Xiaomi don't actually sanitize the input for DDNS settings properly in their API for things that aren't the ips (ie. domain name, username, password).

Even stranger, it appears their version of ddns-scripts is too old to have the commit that would have sanitized out the shell escapes for them? Or rather, they have the version number of a release that should have some checking, but the actual content of that particular commit isn't present? I think they messed up the merge when they forked their own one to add chinese DDNS services?

So I guess api/xqnetwork/{ddnsEdit/add_server/} to insert uci config strings with escape characters and commands, then watching DDNS try to update.

I could be wrong though, someone else should verify the contents of

To confirm these findings.

Edit: It wasn't. They put some sed magic at the beginning to sanitize this instead of using the method from master. Ignore this.

Just ordered one of these routers based on this post, but it looks like it won't be arriving for a month or so potentially. In the meantime though I can help review the files for potential exploits.

Forgive my ignorance - how are you seeing the contents of those files? Are you like decompressing the Xiaomi firmware images, accessing them locally on the device, or are you looking at their code repositories directly?

Probably a mixture of binwalk -e …, ubireader_extract_images -o … and unsquashfs ….

Forgive my ignorance - how are you seeing the contents of those files?

The algorithm for parsing the HDR image format can be found here: 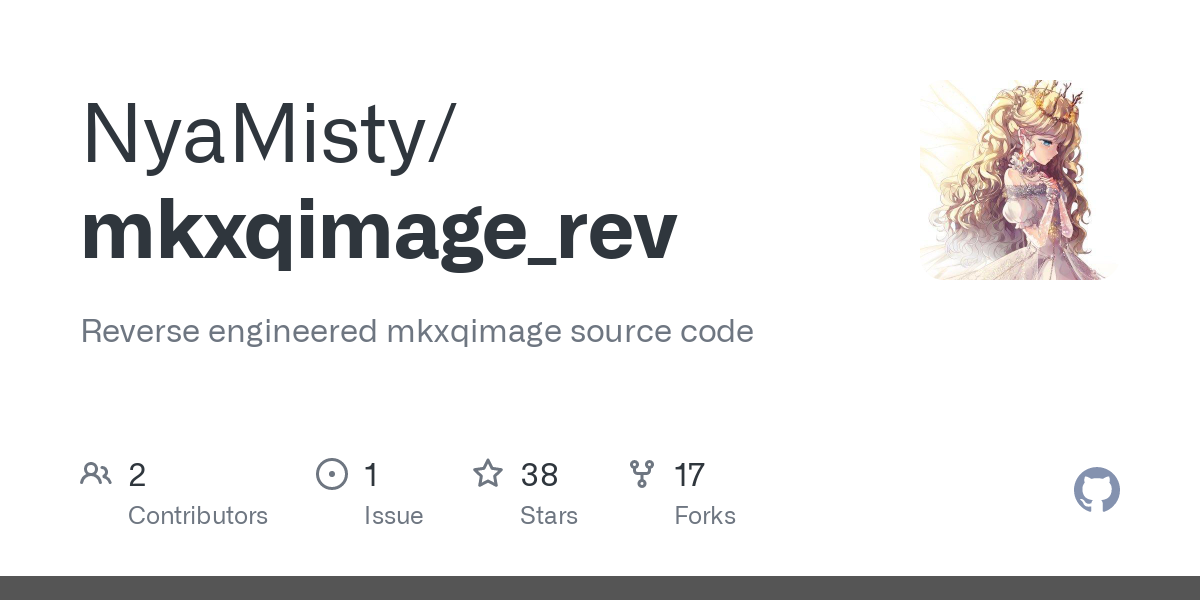 SquashFS (hsqs) images can be unpacked using the 7zip utility. But sometimes these HSQS images are diluted with UBI headings that should be removed.

To decode actual LUAC files, you need to use this tool: 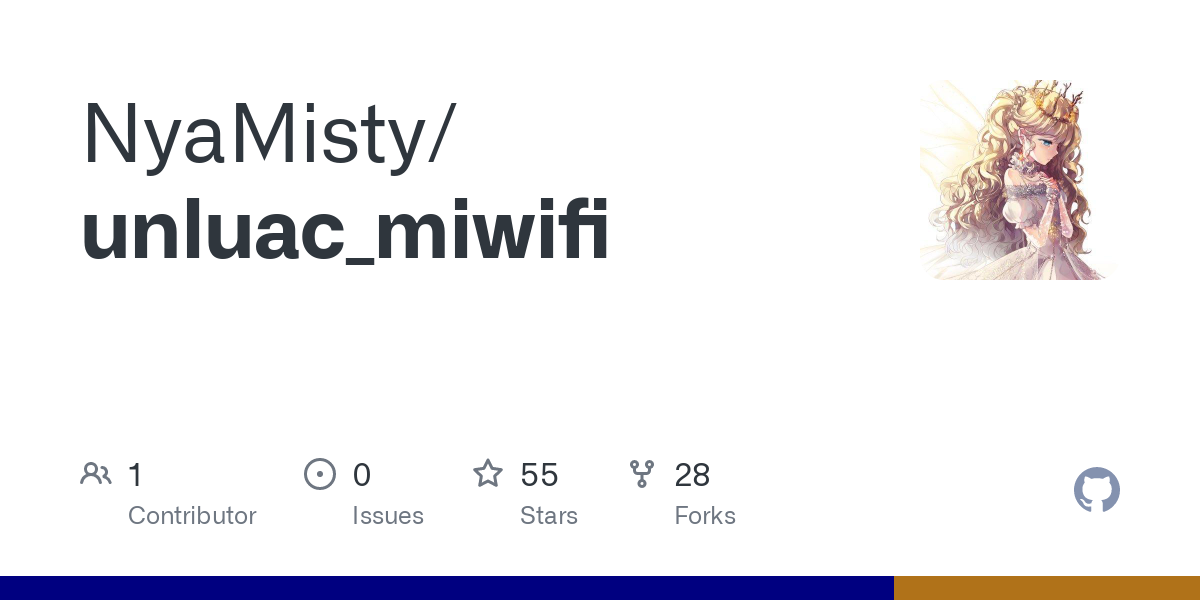 Contribute to NyaMisty/unluac_miwifi development by creating an account on GitHub.

Not a very efficient layout. Obvious change would be to just merge overlay and obr like on the other Xiaomi device ports. Doing more would probably require some u-boot finesse or replacement like the E8450.

We get this division:

It is very likely that this was done precisely for the impossibility of flashing the firmware inappropriate for the region, since this check is built into the bootloader and the mkxqimage tool.

It is very likely that this was done precisely for the impossibility of flashing the firmware inappropriate for the region, since this check is built into the bootloader and the mkxqimage tool.

Yeah, it should make it impossible to accidentally tftp recover cross-region or directly have mkxqimage flash the images without patching the binaries involved?

Also something annoying that I noticed...

The LAN/WAN mac addresses only seem to exist within the bdata partition.

So I have to setup the dual u-boot env partitions and set the macs in 02-network as opposed to the dts.

The internal name of the global model is RB01, and the Chinese name is RB03. Previously, such a division was simply at the level of the region specified in the Nvram/BData partition.

Oddly enough, Xiaomi are advertising the MT7622B CPU as a FiLogic800, the only place on the internet where anyone is calling it such? I've edited the thread title as such, and added the "Xiaomi Router AX3200" as a variant. (Does this make the global version name the Xiaomi Xiaomi Router AX3200 in OpenWrt? That sounds weird.)

Xiaomi are advertising the MT7622B CPU as a FiLogic800, the only place on the internet where anyone is calling it such?

While the teardown on the chinese site was helpful, they managed to write down the wrong voltage for the UART.

Not sure what's up with my Internet LED though, it's both on for some reason (purple).

Not sure what's up with my Internet LED though, it's both on for some reason (purple).

Check the LEDs in the DTS file? or maybe you just need to set it with the 01_leds

@namidairo thinking about buying one

How did you manage to get root access?
And which of the hardware versions would you recommend, the global or Chinese one?

Check the LEDs in the DTS file? or maybe you just need to set it with the 01_leds

Oh right, I had them set to GPIO_ACTIVE_HIGH instead of GPIO_ACTIVE_LOW... All the on/off were inverted

I did also put the wan led into 01_leds now, thanks for reminding me.

I actually did that too. I hope we can put owrt easily.

so mine arrived. it turned out that telnet is enabled in my router by default. password for root can be genrated using script from this page.
overall what are the chances to get working openwrt on this router?

it turned out that telnet is enabled in my router by default.

I tried telnet once or twice when trying to get in without success, I suspect that the factory defaults in nvram/uboot-env are looser than usual for qualification tests or something, then are set back to zero on first boot. I recall similar things being mentioned on the Redmi AC2100.

I would have assumed they would move the firstboot script earlier on so it wouldn't run after the service init scripts, but I guess not?

Highly recommend you take this chance to telnet in and nvram set telnet_en=1, nvram set uart_en=1, nvram set ssh_en=1 (well, you'd still have to modify the init script to ignore the fact that you're running release channel firmware, but the contents of mine would reset on each boot so I think you'd have to put it in the overlay somehow), nvram set boot_wait=on, nvram commit etc; before you lose access. (Worst case scenario you would have serial access to u-boot with these all on.)

password for root can be genrated using script from this page.

Yeah, I slightly modified the python implementation that was floating around because it had some weird dependency and expected a file, even though punching in the serial from the sticker/web ui was fine. I'll paste it below for reference, since many would prefer a python implementation.

so mine arrived. it turned out that telnet is enabled in my router by default.

will check that, @namidairo - do you have any build that you can share? I saw screenshot - is that yours?